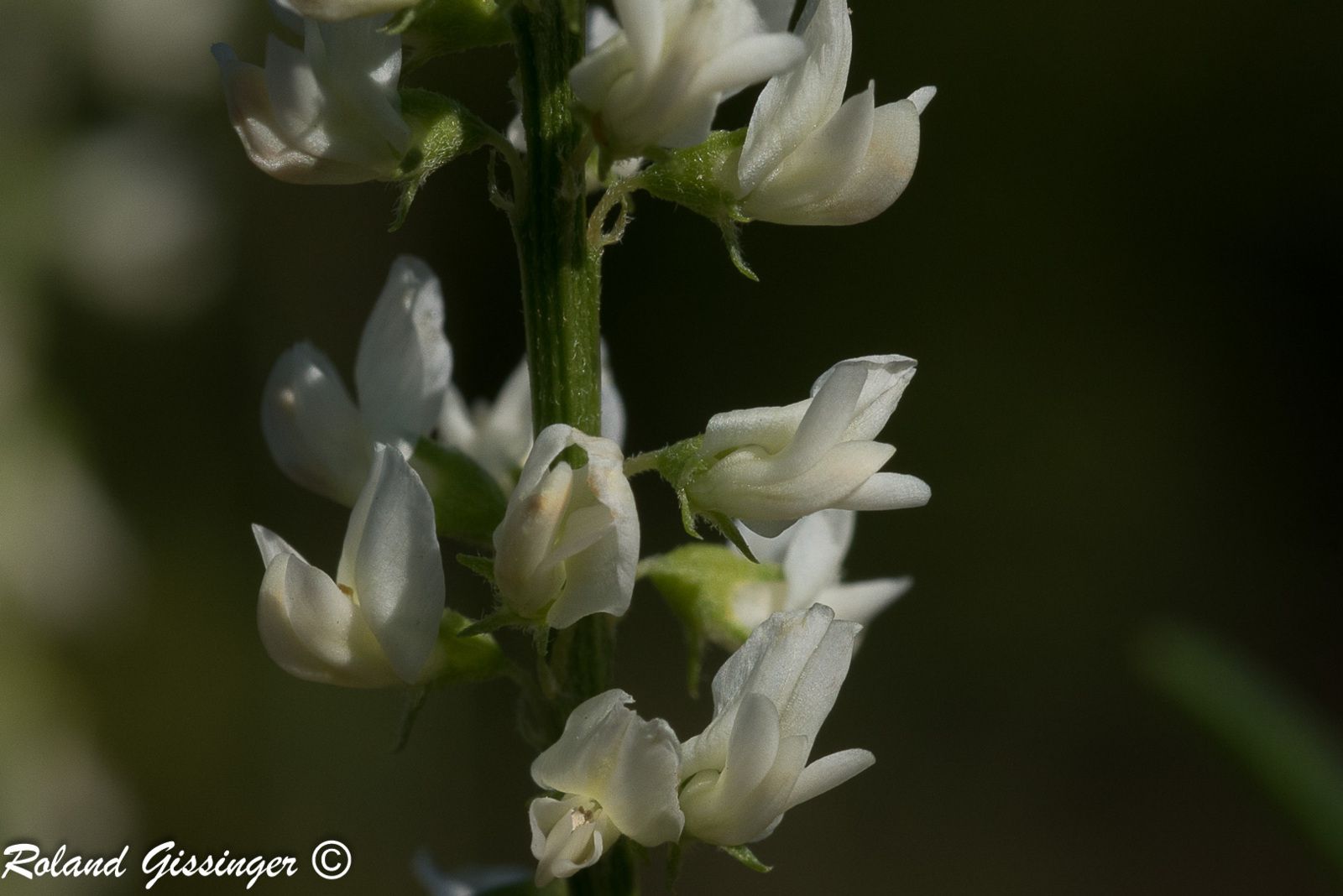 I present to you this large plant with very many small flowers that you have probably already seen on vacant or sandy ground, railway tracks or stony ground.

Origin of the name: from the Greek “meli”, honey and “lotus”, “the trefoil” or “trefoil of honey” because it is a very melliferous plant as beekeepers can testify. Its species name comes from the Latin "albus", "white".

Date of observation: July 25 in Wieswiller (57)

Plant Family: White Sweet Clover belongs to the vast Fabaceae family which includes 12,000 species worldwide. Fabaceae are one of the first sources of food for a very large number of people. Soybeans, peanuts, beans, peas, alfalfa, clover, liquorice, rooibos belong to this family.

Soy contains 20-35% protein and amino acids by dry weight and can replace protein of animal origin such as meat and fish. Peanuts are a vegetable of prime importance for oil.

Fabaceae are therefore a very important family in economic and food terms.

In addition, most Fabaceae are used as green manures. They fix atmospheric nitrogen through their roots, which contain fixing bacteria in small nodules. They are therefore planted alternately with cereals and more and more often mixed with cereals.

The family name derives from Faba, the bean. The Fabaceae were formerly called Leguminosae or Papilionaceae. Their name came from the shape of their flower. It is irregular, butterfly-shaped except for the group of mimosas.

Type: It is a large plant with many small flowers. Its stem is attached to a long (70cm) taproot. It is annual or biennial and branched in its upper part.

Foliage: very typical with 3 leaflets in ellipses with regular teeth from 15 to 60 mm. Each leaflet, 1-2 cm in size, is connected to the main stem of the leaf by a small stalk or petiolule. The petiolule of the middle leaf is longer than the lateral ones. The leaves and stems are glabrous. The leaf petiole is surrounded at its base by leaf parts, the stipules, which are entire.

Flower color: the flowers are small (8 mm), creamy white, very numerous, from 40 to 80 grouped in spikes. They have bilateral symmetry and are connected by a small peduncle of 1 to 2 mm, to the stem. They have 5 petals of equivalent size but of different shape (wings, hull and standard). The style emerges from the corolla or rather from the petal in the shape of a boat hull, the hull. The 10 stamens are fused at their lower end, 9 on one side and one on the other. The calyx is formed of 5 fused sepals marked by small teeth.

Pollination: The flowers are visited by bumblebees and bees but also by many other insects such as diptera and butterflies.

Confusion: no risk in our regions.

Habitat: in full sun, on all types of acid or non-acidic soils, dry to slightly humid places on sandy and gravelly soils, paths, gravel pits, crops or disturbed ground. As it produces nitrogen itself, it manages to establish itself on land very poor in this chemical element. It resists drought thanks to its long root, tolerates low salt content and tolerates winter temperatures down to -15°.

This plant native to southern Europe has colonized Eurasia for a long time. It has recently spread to other countries, Oceania and in particular to North America where it is considered invasive in certain regions such as Tennessee and Quebec.

Fruit: it is a pod 3 to 4 mm long. It is smooth and black. It contains 1 or sometimes 2 round seeds. As the flowers are extremely numerous, the production of seeds is enormous. The seeds are well liked by wildlife. They can retain their germination power for several decades.

Agriculture: this plant is used as fodder for animals but also to stabilize the soil and restore the land. It is also a good bee plant.

The seed is small and can be transported with other seeds such as alfalfa and settle in these plantations. As it has no (or almost) soil requirements, it can grow haphazardly in open spaces and where there are few predators. It does this at the expense of local species, grasses and even trees. On poor soils it disrupts biodiversity by reducing the number of native species because it has little nitrogen requirement.

It has been shown to increase the number of exotic and invasive species in mountain meadows and decrease the resistance of the banks along the watercourses where it is installed by eliminating the local plants that stabilized them.

How to limit the expansion of this plant, such is the problem of countries where it is not native. (Americas, Oceania…)

If crops are dense and sown with perennials, sweet clover disappears in less than 2 years. Multiple mowing can limit its expansion but on condition that it is carried out at ground level.

Fire and biological control have been tested but without much success.

Protection: There is no legal protection for this plant which is not in danger of extinction

Well-dried flowers are used to make herbal teas and flavor cheese. They give off a pleasant smell of dried hay linked to the presence of coumarin derivatives. The raw leaves flavor the salad but are bitter.

Attention, undried and contaminated by molds this plant produces large quantities of highly toxic coumarin analogues of the dicoumarol type.

Medicine: this plant was widely used in traditional medicine to fight against circulatory disorders, and its dried flowers against skin ulcers. She fell out of favor.

Medical properties, copy below from wikiphyto:

Coumarins: numerous coumarin components including melilotoside, a chemical signature of this type which is transformed into coumarin

Properties of the plant:

 Coumarin, which is not anticoagulant, stimulates the reticuloendothelial system and the proteolytic power of macrophages